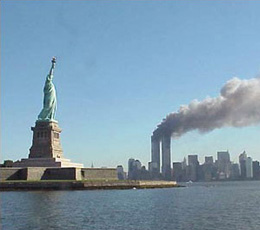 Mama: “We’re under attack! Turn the TV on. I heard it on the radio on the way to the school [where she worked at the time].”

me: “Hey, how’d they have cameras ready to go when it hit? Waitaminit…that’s another one!”

me: “…” *carried slack-jawed look while watching for another hour or so*

*showers and heads for 11AM class, Dr. Saddow’s Electromagnetic Fields I*

And that’s where I was and what I was doing on my Mama’s birthday back in 2001, now simply known as 9/11 and serves as one of my generation’s flash-point events, similar to the JFK assassination and the Challenger explosion.

This year, her birthday was much more low-key…a large chunk of family hit one of the better fish camps for supper tonight. But we’re still living in the post 9/11 world, and that won’t go unremembered every day from now on.