I was doing something the other day I won’t be doing again in the foreseeable future: reading a Motor Trend magazine. I was out of toilet reading material, but, while reading, I found another toiletry use for the magazine. Yup, they’re pushing an increased gas tax, like the government’s talking about even now. It’s all about forced behavior modification and enhanced governmental control over lives.

I got to do something a week or so ago that I haven’t been able to do in quite some time: watch a space shuttle launch. I can’t even remember the last time I’d watched one, but it’s just as awesome as I remember them. But with all the talk of retiring the shuttles floating about and current government plans for replacement, I really have to look back and evaluate my understanding of the space program.

END_OF_DOCUMENT_TOKEN_TO_BE_REPLACED 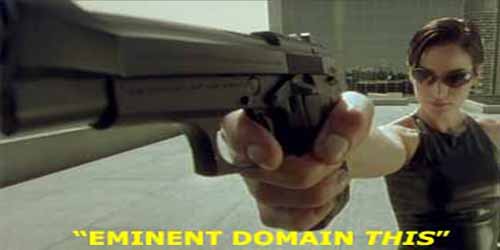 I have always hated the entire concept of eminent domain ever since the state came to my father and made him sell some of his frontage property.

Excuse me, but I don’t feel like leaving my life in the hands of men who only have to qualify their gun handling skills once a year, much less to some nutbar with a grudge.

I am an Opera user, and I have been ever since the late nineties…probably as early as 1997. I love Opera…I always have and, from the looks of it, always will. It’s here to stay, and there is no reason to pull the plug on it.

In further attempts to better waste taxpayer time and money, representatives to the U.S. House have proposed the College Football Playoff Act of 2009. Hey, try winning all your games next time, and stop wasting Congressional law-making power.

Indeed, it’s a huge load of baloney.  If you watch the news to any degree, you’ve been hearing this hokum for some time.  Yeah, it’s actually several degrees worse than mere baloney, but I’ll restrict it to that.

For some perverted reason, over the last few years there’s not been a Christmas that has gone unspoiled by some tomfoolery. This year (2008), the flashpoint is apparently centered in the Washington State Capital building, where an atheistic organization placed a sign protesting religion in general, Christianity in particular, and Christmas expressly.

It’s a display that smacks of spiteful children railing about how unfair some fact of life is.

Yup, that’s a provacative title, but I can’t think of any other explanation aside from abject ignorance. Basically, it boils down to three matters that, while interrelated, are still discernable and worth putting forward. This is my mile-long post for the year, so hold on to your hats.

One of the key freedoms guaranteed in the first amendment to the U.S. Constitution is the right to free speech.