This will be the final article chronicling the construction of this project. At the time of this writing, the system has been in operation since late October 2011, and it remains in working order…I have a problem with a blue screen from time to time, but I’m tracking that one down. Another article may be posted later on setting up the machine and some of the tweaks I had to make (such as buying a wireless Logitech touchpad keyboard to use it), but the construction was the most unique part of the project so that’s what I’ll limit the focus to at this point.

At this point it was time to start creating brackets in order to mount the various drives to the inside of the case. This would prove to be the most “custom” of this custom project; no parts existed that would fit the 5200 system case!

Luckily I’d recently stocked up on plastic modeling resources (some, like scribes and the Dremel, had come in handy already), and among these was a supply of styrene plastic in various forms. This is a very workable medium, which could be cut with scribes or even scissors and permanently bonded with super glue. But it was also strong and flexible enough to serve the purpose I had for it. so it was really the ideal solution to this one-of-a-kind job.

The hard drive mount was surprisingly difficult, because I had not observed the classic axiom of craftsmanship: “measure twice, cut once”. This would have saved me several styrene tubes and prevented unnecessary ventilation of the case bottom. But since it was hidden by the lip below, you’d really have to be looking for them to see them at this point.

An unforeseen stroke of providence occurred when I realized the SSD could be mounted beneath the HDD almost effortlessly. I bored two holes, twisted a couple screws, and I was in business. That was the single easiest part of the build. No pictures were taken precisely because of this, which I now regret, but that lip inside the case was far more of a help than a hindrance in this singular case.

The DVD drive would be far more of an issue. I knew it had to be accessible from the front, so cutting the front of the case, my biggest concern, had to be done. Because the case is so clean and smooth up front, this was by far the most nerve-wracking part of the build. Despite my careful attempts to line up the drive with the front, the cut was not as smooth as I’d have liked it to be.

Additionally, the fascia below the cutout broke off as a result of test-fitting the drive face. While this was a personal disaster, I realized I could glue it on the bottom and have it match up rather well, to the point it might go unnoticed by on-lookers. I haven’t yet, as I’ve felt no need to…the piece remains in a parts drawer. Nothing in this world has any business being perfect, right?

But it’s at this point the DVD drive presented a problem that needed solving…essentially, how to mount it. Being a laptop drive, it didn’t have convenient and standard-sized screw-holes I could use. Therefore, it required both a tray bracket on the bottom to hold it in place and a top portion to stabilize it. Given the angled top, this was a challenge that proved quite frustrating until I hit upon a solution, which you’ll see below: 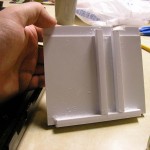 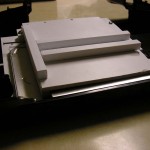 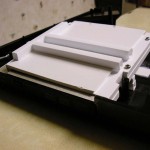 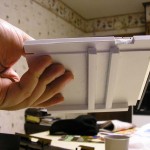 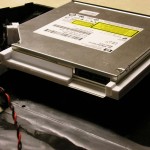 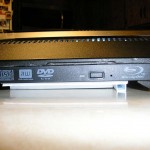 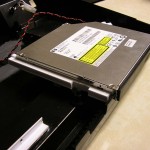 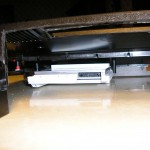 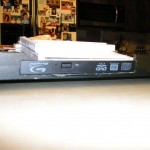 From this point, it was a matter of connecting the SATA and power cables. This was a problem, as cable routing was a nightmare in the cramped case (but was resolved by locating the cables under the mobo…see photos below), and I had to get a power adapter for the DVD drive. Because it was built for laptops, it didn’t use a standard drive power connection, and a special one had to be ordered. After ordering the wrong thing, I got it right…for anyone looking for the correct cable for connecting a laptop SATA Blu-ray drive to a desktop machine, it was a “StarTech Slimline SATA to SATA with LP4 Power Cable Adapter” that I got via Amazon. 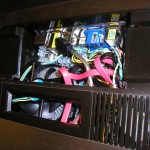 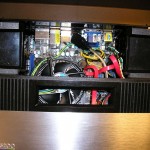 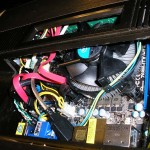 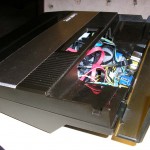 Once the drives were in place and the connections were made (special attention must be paid to the motherboard manual for the correct USB connections), I hot-glued the LEDs in the Atari case. Providence hits again…there were three spots under the smoke-colored fascia to accommodate them…gotta love those old Atari designers! The power switch was already set, so all that was left to modify the case for usage was to put a USB port in the controller 1 port. I took a scrap piece of black plastic from earlier case work, cut a hole, put an external USB port in the gap, epoxied it in place, and made the connection to the main-board. 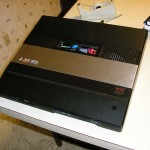 From that point on, it was a matter of putting the top on it and buttoning it down. I was quite thankful I decided to keep the screw posts in their pre-existing places! It was tricky due to the Blu-ray drive being attached to the top of the case and having to be connected before cinching it down.

There is some remaining work to be done. I really want to put some sort of trim around the DVD drive and improve the look there. I also plan on putting a “vent” over the old cartridge port. I have plastic grating (as seen around that port) available on the other case I picked up in the beginning, so it’ll only be a matter of cutting it out, finishing it out, and dropping a spot of epoxy there to hold it in. So, all in all, it was a pretty good project that I find more useful every day, but I don’t think I’d do it all over again. Then again, now that I know what I’m doing…. 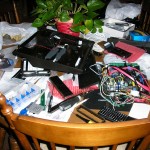 But it was great to finally get the dining room table cleaned off!