You may have noticed that the first three sponsors of this bill are from the state of Texas. This is not by coincidence, as it is fans of the University of Texas that are making the most racket about a playoff. Ever since Oklahoma was selected to play in the Bowl Championship Series National Championship Game, Longhorns fans have been fit to be tied.

Then there are the other agitators for various other schools who have been similarly put off by the BCS, as well. This is why I imagine the representative from California is on there, since they’ve managed to straighten out their home state so well.  As for Bobby Rush, well, he’s tight with Barack Obama, who has advocated a playoff system.  Maybe he’s just doesn’t have enough to keep him occupied.

Anyway, here’s the gist of their bill:

To prohibit, as an unfair and deceptive act or practice, the promotion, marketing, and advertising of any post-season NCAA Division I football game as a national championship game unless such game is the culmination of a fair and equitable playoff system.

The first problem I have with this bill is that it’s a waste of money and time that its predominantly Republican sponsors should be ashamed of and chastised for by their leadership.  The second, albeit more subjective problem I have is that the whole thing’s nothing but a pile of sour grapes.  But my third big problem with it is that there is no fair and equitable playoff system possible within the confines of the playing season, historic bowl system, and very nature of the game.

Regular readers of my ramblings (heh!) will remember my earlier commentary on this situation, On College Football Championships (and my tangential commentary on the 2007 BCS Championship).  There are many problems with “solving” this “problem”…something people are spending an inordinate amount of time moaning and groaning about.  I went on at length explaining whysuch a system is neither possible, advisable even if it was possible, and why belaboring the point is foolish. 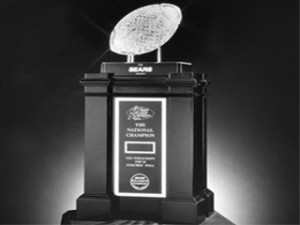 I’m still a fan of running all the bowls, looking at the final AP and Coaches polls, and either declaring a unanimous champ or setting up a game between the two #1’s.  But Congress telling the colleges how they’re going to run their championships is total garbage.

The problem this year was not with the BCS.  It was with the Big 12 Conference and the way they handled tiebreakers by deferring to the BCS rankings in a three-way tie.   That’s the cause of  all the drama.  Had their rules been like those of the Southeastern Conference, it would have checked the polls, eliminated the third highest-ranked, and if the second highest was within five spots of the top ranked team in question, they’d use the winner of their head-to-head to determine it.  By those rules, Texas would have gone to the Conference and, most likely, National Championship games, not Oklahoma.

Now, one could make an argument promoting Utah (who I think would have dismantled whoever they were put against, given the way they field-stripped Alabama) or USC (who, as usual, was overrated this year), but the lion’s share of the belly-aching emanates from Texas.  All I can say is, get over it, people.  Try winning all your games next time, and stop wasting Congressional law-making power to get back at everyone by screwing up the closest thing we’re likely to ever have for a National College Football Championship.