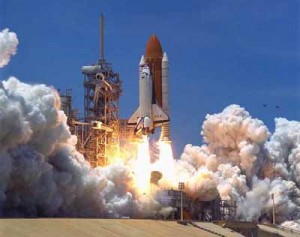 I got to do something a week or so ago that I haven’t been able to do in quite some time: watch a space shuttle launch. Yay, NASA channel! I can’t even remember the last time I’d watched one, but it’s just as awesome as I remember them. But with all the talk of retiring the shuttles floating about and current government plans for replacement, I really have to look back and evaluate my understanding of the space program.

The first thing that sticks in my mind is the supposed obsolescence of the space shuttle, despite there being no viable replacement for the vehicle. It’s easy to say, “oh, they’re dangerous,” or, “they’re over thirty years old!” Gee whiz, so am I, but I’m not ready for the Smithsonian yet. As for danger, when has space travel not been dangerous?

Sure, there was the Challenger disaster…one that sticks out in my mind, I might add, as I was in second grade at the time and one of my elementary teachers was a candidate for the Teacher in Space program. We would have been watching that launch live on television had the school TV not been on the blink. Columbia was a horror, as well…who can forget seeing it streaking through the sky? But it’s not been since the shuttle era that there have been tragedies for the space program. Apollo 2 springs instantly to mind.

But where’s the replacement? I’m hearing 2016…a full six-years after the retirement of the shuttle. In the meantime, we’ll have to piggy-back with the Euros, Soviets Russians, and Chinese, or whoever else can be coerced into helping, be it foreign governments or private enterprise (which is in the process of being made extinct in America, but that’s the subject of a whole ‘nother article). I haven’t heard anyone else say it, so I will: this is more retarded than a special ed convention in Rio Linda (apologies to Limbaugh). The USA has long been recognized as the leader in space travel, and we just demoted ourselves voluntarily.

And not only that, but the Orion spacecraft is mostly vaporware. The shuttle should not be retired until a suitable replacement is ready to pick up where it left off. Again, that’s government for you. Adding this to the fact that the Orion seems to be a revisitation of pre-shuttle concepts using 21st century technological advances, and we’re left with a concept that leaves me pretty underwhelmed. And given that these are more transport-oriented, what about conventional orbiting experiments and work…is that going to use the ballyhooed but largely untested by NASA aeroplane-looking doodads?

Furthermore, I just have a hard time doing away with old, reliable hardware when there’s no clear upgrade path. It doesn’t make sense, from an engineering or business standpoint…but it’s here that we must realize, hey, we’re talking about the government. It doesn’t have to worry about real-world things like that. Plus, I have a habit of overly personifying inanimate objects…for instance, I hate trashing things I’ve used for a long time that started showing age. It’s like stabbing an old friend in the back.

I’m overly sensitive, sentimental, or just plain mental, but the shuttle definitely applies. While children of the sixties and seventies grew up with Saturn V toys, I grew up with shuttle toys. It’s a part of the culture of the twenty-and-thirtysomethings that is falling by the wayside.

Another aspect of this launch that I began reflecting on was how it was covered. Oh, there was mention of it on the news channels, and as they got closer to launch at least one (FNC) switched over to the launch as the timer entered its last seconds. But it’s like they covered it just in case something “good” happened, like another piece of fragmented insulation falling from the lox tank, a bird strike, explosion after 73 seconds, etc.

The coverage seemed very vulture-like. It reminds me of my recently-passed uncle and his also recently-passed old neighbor. There was an old, high, but dead tree in front of the neighbor’s house with two buzzards on it. Every now and then, one of the buzzards flew off, but eventually flew back. The neighbor and my uncle came to the conclusion that the buzzards were staking out their houses and waiting for them to die, with one flying to check the other house every so often. A funny story…and that seems to be the rhyme and reason behind the shuttle news coverage. Or, more accurately, all cable news reporting, but I digress.

It’s just discouraging that it’s viewed as such a pedestrian event, since a launch is still just as awesome as ever. And it holds not a candle to the days of Apollo, when every launch was an event that dominated network news AND network programming. It’s not sexy or cool enough, I suppose…and that’s a sad but generally accurate commentary on the modern media consumer.

All told, space is still the final frontier, and it’s still a thrill for me to witness it being explored and utilized for the betterment of humanity. But I’m going to miss the shuttle, especially when they’re junking it out of what seems to be negative bias and reluctance to improvement with no worthwhile replacement waiting in the wings.