Here’s what has me so put out right now. Everything in here is utterly ridiculous, from his pathetic analysis of the Israeli/Palestinian conflict (which I’ve addressed several times in the past), to his feeble attempts at rationalization between the treatment of Palestinians and that of Native Americans, to his attacks on “Christian Zionism” and “deterministic-dispensationalism”, to his complete neglect of God’s promises and faithfulness.

“These doctrinal formulations often use a bogus end-of-the-world scenario to create a kind of death-wish for World War III, which — unless it is confronted more robustly by the rest of us–could too easily create a self-fulfilling prophecy.”

In a nutshell, the problems between the Israelis and Palestinians is not due to Christian Zionism or deterministic dispensationalism. The problem is that Muslims tend to hate Jews and won’t live peaceably with them despite their definite right to live there. Israel lets Arabs live within its borders as citizens who can even serve on the Knesset, as long as they aren’t trying to destroy the nation. Of course, people like McLaren are too blinded by political correctness to realize that the ballyhooed two-state solution is the same thing as Hitler’s final solution, as it would give the Arab states surrounding her the beach head from which they may destroy the Jewish state.

And, no, the plight of the Palestinian is not related to that suffered by the Native Americans (who’re being paid back quite handsomely to make up for it now), since Israel isn’t the one who rounded them up into concentration camps and annexed their lands…that would be Jordan. See the first article of mine that I linked to earlier for more info. 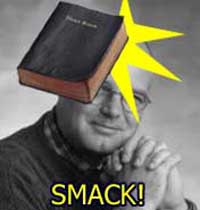 As for his theological assertions, what I take from this is that he believes that those who literally believe in the promises made by God Himself to Israel and of Christ’s return are the source of the problems in the Middle East and must be abandoned. Well, I’m sorry, but I have a little problem with that…I’m looking at it right now. It’s a leather-bound, gold-edged book with the words “Holy Bible” written along the spine that tells me under no uncertain terms that God’s not through with His chosen people of old and that Jesus Christ is on His way back.

I particularly like the “confront more robustly” part. First, as a general rule of thumb, I defy anyone to confront me robustly about anything and enjoy the outcome. On matters of Christian faith, there’s no ground on which to stand besides God’s own Word. If that’s what he’s standing against, and, in this case he is; he’d have better odds in bracing to hold back the ocean’s tide.

Admittedly, I had to think about the term “deterministic dispensationalism” for a while. Based on it’s usage, I’d say it’s there as a pejorative rather than a descriptor, as determinism minimizes the influx of free will in dispensational doctrine. As if God’s overarching plan has ever been hamstrung by human beings…an omnipotent & all-knowing God works His will and way regardless of us. We just choose what role we play: either we help bring it about, or we oppose it.

Of course, the whole jist of it is that his involvement in the emergent church movement requires that he speak out against Christianity and the Bible. The whole thing is about people who are disillusioned with church and doctrine and such and want to change everything and put everything up to scrutiny. Doubt is a key virtue rather than assurance.  Social activism is more important than witnessing.  Having open-minded conversations and accomodating the unsaved is preferable to preaching the Word of God and the only way to salvation.  Working toward earth-bound utopia is the mission rather than the blessed hope of heaven (which is okay, because they don’t necessarily believe in a literal heaven…or hell, for that matter).

And consider some of what his colleagues have said in the past, such as Tony Campolo, who is on record as saying mostly the same thing in his book Speaking My Mind. The poster-child for church growth at the cost of right doctrine, Rick Warren, has gone so far in his seminal Purpose Driven Life to say that anyone studying prophesy is unfit for God’s kingdom. Please explain to me, then, WHY FULLY THIRTY PERCENT OF THE BIBLE IS PROPHETIC?! Then, again, he was also using a woefully out-of-context quote of Jesus from Luke 9:62 that wasn’t helped by citing it from garbage like The Message or The Living Bible.

In McLaren’s article, he recommends some books to read…I’ll stick to my Bible. He should try reading II Timothy 3:16-17, and call me in the morning.