“They who can give up essential liberty to obtain a little temporary safety, deserve neither liberty nor safety.” ~ Benjamin Franklin

The recent shooting in Arizona that killed a federal judge, a congressional aide, a 9 year-old child, and three others; and wounded over a dozen bystanders, including a U.S. Congresswoman, is the latest example of a borderline world being struck by those who’ve already crossed the border of sanity.

It’s a lot of things: a crying shame…a tragedy….an outrage…an assassination and attempted assassination of public officials…a terrible crime. In any case, it is a senseless event in American history where people were needlessly and heedlessly cut down for no good reason. As such, it deserves attention for no other reason than to focus the prayers of the faithful and the love of well-wishers on hurting families and the survivors.

Such events tend to drive the asking of hard questions, not the least of which being, “why?” As in, “why did this happen?”, or,  “what made this person do this terrible thing?” And then a very subjective question is generally asked: “who is responsible for letting, making, or causing this to happen?”

We as human beings are for whatever reason predisposed into assuming that a person is not in himself evil, that he has to be made to do something so amoral as to walk up to an undeserving person, shoot them in cold blood, and then randomly fire on bystanders, almost as punishment for innocently being at the wrong place at the wrong time. Being an armchair student of theology and human nature, it’s not difficult for me to make the assertion that people are inherently evil and self-serving.

But this is unacceptable to most people, despite the overwhelming evidence to the contrary and the fact that such an assertion provides the obvious answer to the cause of the world’s major problems. There has to be a boogeyman…a scapegoat for the ills of the moment. It provides a self-affirming, politically-correct balm to the souls of people who think they’re all right and so is essentially everybody else. After all, someone has to bear the blame!

In this case, many in the national media would posit that it is not, in fact, a lone, mentally unbalanced, self-righteous nut who conceived the crime; but an impressionable blank slate filled with vitriol and hate by outside forces. Such a person, therefore, is not directly responsible for the sentiments directing such cruel and wanton (at least, to the sane) actions. The blame lies on those outside forces with whom decent people cannot agree.

Who could this possibly be? Why, it must be Sarah Palin and her willing accomplices, the TEA Party. Who else could be responsible? They are hateful, angry, and stimulative of popular unrest, and nobody in their right minds could possibly sympathize with their acerbic moanings and groanings.

The only problem is, they aren’t. The murderer was a drug-abusing, flag-hating, anti-Christian nutbar with a seemingly non-existent understanding of how everyday life works and whose favorite books included Mein Kampf and The Communist Manifesto…you guessed it, not typical preferences for those politically-aligned to the center-right. Pima County Arizona Sheriff Clarence Dupnik, so widely-quoted as saying that the Tucson shootings were caused by the “vitriolic rhetoric that we hear day in and day out from people in the radio business and some people in the TV business,” has confessed to having found nothing in his investigation to support his allegation, though he sticks with it.

Truth to be told, this is being used as an excuse to beat the drum against legitimate dissenting views in this country. If an amorphous grassroots group of Americans dares to oppose what they see as constitutional usurpations of power on the federal level on the part of  a particular political party, they are seen by those in the media and power structure not as political opponents or people with a valid view worthy of argument and debate…they are seen as fools at best and potential terrorists at worst. Since the mid-term elections, these views are obviously resonating among voters nationwide, so the disdain for the so-called “tea-baggers” has to now take the form of what it actually is: a new wave of political activism that transcends the traditional model of young, left-leaning acolytes fighting The Man™ to the everyday, middle-class, American family-man and woman who want to keep more of their earned . But they still don’t like it, so there has to be a way to continue marginalizing them without cutting their own throats.

Therefore, the actions of a lone lunatic are blamed on a movement of people and those who represent them…in this case, Sarah Palin, due to her “targeting” of congressional districts during the mid-term election. We have to tone down the volatile rhetoric…after all, there are loonies in this world who glom onto such things and get such bad ideas! The chatter has to be moderated when criticizing the government and defending the Constitution…though I’m willing to bet that accusing the other side of kicking old people to curbs and making them eat dog food and such garbage will be found to still be within the bounds of legitimate political discourse.

And I’m also sure that doesn’t apply to the militaristic language used by the media on a regular basis in reference to political news (ground war, crosshairs, media blitz, etc.) or to the downright thuggish comments made by our current President (“They Bring a Knife…We Bring a Gun”, “I don’t want to quell anger. I think people are right to be angry! I’m angry!”, “Hit Back Twice As Hard”, “We talk to these folks… so I know whose ass to kick.“, “Punish your enemies.”, “I’m itching for a fight.” etc. etc. etc.) or to that used by the liberal blogosphere (particularly the DailyKOS article, “My CongressWOMAN voted against Nancy Pelosi! And is now DEAD to me!”).

At this point, Walmart’s main direct competitor is gonna have to change its branding, and PDQ, to boot. Because the very word “target” means killing, obviously.

What it boils down to is this: to the media and the leftists in power, the TEA Party people have to be shut up. They can’t have people putting crosshair targets on congressional districts. They can’t have people calling for the removal of politicians. In an effort to control what is and should be beyond their control, Rep. Robert Brady, D-Pennsylvania, has said he will introduce legislation making it a federal crime for a person to use language or symbols that “could be perceived as threatening or inciting violence” against public officials.

Question: who decides that perception? What this says to me is, “to blazes with the First Amendment to the Constitution! You can’t say anything WE don’t approve…WE control the vertical and horizontal!” And people have the gumption to tell me the slippery slope argument is not a valid one? Here it is, before your very eyes.

Wrapping this terrible crime like an albatross around the necks of American citizens who legitimately criticizing government officials, thereby blaming them for the actions of a crazy individual is irresponsible and immoral, and it should not be stood for. It’s part of a continuing effort to silence speech unpopular with the entrenched media and current (thankfully recently diminished) majority in Washington. If demonizing the TEA Party and Palins of the world doesn’t do the job, blame them for inspiring criminals to murder. And if it takes sacrificing a little of the people’s freedom for a little security for those who hold and do not want to give up power, well, they like that equation.

Ben Franklin would not agree. Nor do I. 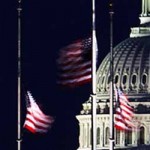 Over and above all this, I keep hearing yap about a high capacity magazine used in the weapon (a Glock 17 9mm). I haven’t heard anything said about it other than in passing, but as this article’s long enough already, I’ll chalk it up to genning up another excuse to ban guns that hold more than 10 bullets total. If and when that becomes a hot button issue, I’ll address it then. There’s enough going on right now as it is.