But more on that later. I was doing something the other day I won’t be doing again in the foreseeable future: reading a Motor Trend magazine. I used to be a subscriber, but I dropped it because I didn’t plan on buying any cars anytime soon. But I saw this one on the shelf and noticed that the cover article was on a head-to-head between the newest high-octane Ford Mustang, Dodge Challenger, and, most importantly, Chevy Camaro.

Being a Camaro-phile, I felt like bringing it home to enjoy the pictures at length. Besides, I was out of toilet reading material, but, while reading, I found another toiletry use for the magazine.

In the course of reading about a new Lincoln concept luxury car, I get this little nugget:

The automotive landscape in this country is going to change profoundly over the next decade. Driving that change will be tough, new fuel-consumption regulations and the growing realization among lawmakers, including some die=hard Republicans, that the price of gas will have to be increased to encourage consumers to buy those fuel-efficient vehicles. (It has not escaped Washington’s attention that, while customers were eagerly lining up to buy hybrids in May last year when gas was $4 a gallon, there were some 600,000 unsold ones–according to Mike Jackson, CEO of mega-dealer Auto Nation–sitting on dealer lots around the country in February, when gas was hovering around $2 a gallon.) 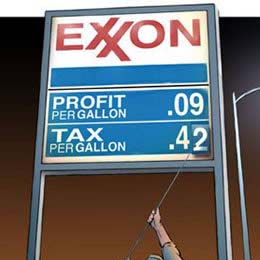 Yup, they’re pushing an increased gas tax, like the government’s talking about even now.  Now, one could say that this is objectively reporting a sad fact of life. But it doesn’t read that way to me, because the whole premise of the argument is flawed from the start. It’s all about forced behavior modification and enhanced governmental control over lives. How? First is the control of travel. Second is influencing buying habits. Third is the incremental abrogation of liberty.

When people think about Americans enjoying their freedom, mobility is often the first thing that springs to mind. It’s been a hallmark of the American experience; when you want to go, you go, and you keep going until you’re ready to quit. If you don’t like where you live, you move. Now, in order to preserve energy, we’re told not to drive so much. Keep that mileage down! Of course, taxing gasoline is a sure way to keep people home, but at what cost?

Since the American people tend to resist attempts to limit their travel, the tax is also aimed at making us buy crummy little econocars like the Euros ride around in but nobody here wants. I don’t want to drive down the interstate in little more than a sheet-plastic encased go-cart alongside 18-wheeled behemoths that wouldn’t even notice rolling over me. I’m certainly not happy about spending megabucks to get the little turds, either. I like my 15-year-old Camaro just fine, as long as it’ll carry me where I want to go. And when it dies, I’m hoping to have the scratch to buy myself a new one, not a Pope-mobile.

The fact is that I don’t like when someone else mandates that I buy X amount of fuel for Y many day’s and Z number of miles of travel in so-and-so’s new hybrid Fantasticar. It’s why I don’t consistently drive under the speed limit, which, by the way, is the same thing. By the way, have you ever heard the factoid that most accidents occur under 45MPH? It doesn’t matter, because it’s a sure-fire moneymaker. That’s what this is…abridged freedoms in an effort to control our behavior and collect our money.

What’s even more disingenuous is how, once people quit driving so much and quit buying so much gasoline, what does the government do? Why, they increase the gas tax! Whatever for? Because of the reduced revenues, duh! It’s already happened in several states: when people quit buying gas, they raise the tax to cover the difference in their budgets. So conserving won’t lower it much more than shortages do.

“Oh, but it’s going towards infrastructure!” “It’ll help fight our pollution problem!” “We need to do something about global warming!” Oh, really?  There won’t be many of us being buying much of anything after the economy finishes collapsing with all the additional taxation and coming inflation and debt from the “stimulus” or the problems that accompany increased energy costs. But Big Brother doesn’t care, so long as you do what he wants you to do.

Take me for instance. On average, I travel seven days a week to town…four days for school, three for work. I also go to church three times a week. I don’t go on vacation…I’ve never had one. I don’t go on many road trips…two in the past year. When I do, I’m probably car-pooling. And the federal government wants to tax me more for it? I can’t stay at home, as much as I’d like to, and I’m not moving to suit the Washingtonian halfwits with a God complex.

So I’ll pay for it. That’s my wealth going out the door because they don’t want to drill for oil, put up more nuke plants, or leave automotive unions in the dust. Who’s going to bail out my tail when I go under? The answer: the Lord and me, because no one else can or should.  But it’s going to be harder than it has to be.

The revolution is coming. Be ready.