(As an aside, unless I’m citing something, I have and will always spell the Koran as I just did: it’s simpler, and it’s said basically the same way. Plus, I’m not a fan of the push to globalize modern English to suit someone I don’t particularly care to suit. As an illustration, how would you pronounce Niger or Qatar? I learned it as “nigh-GER” and “kuh-TAR”, but now you usually hear them as “NEE-jehr” and “KUT-ter”. Took me a while to figure out what the news people were talking about until I saw the names written on the news crawl.)

A big brouhaha has recently erupted over the plans of a church in Gainesville, Florida, to mark the 9th anniversary of the terrorist attacks of September 11, 2001, with what they’ve called “International Burn a Qur’an Day”.

The Dove World Outreach Center, a non-denominational church, will be hosting a mass burning of the Koran as a stand against Islam, which they claim to be “of the Devil”, and they’ve decided to make this a big spectacle for everyone to see. It’s become such a spectacle already that government representatives, from the Justice Department to General David Petraus, to the Council for American Islamic Relations (CAIR), to the National Association of Evangelicals (NEA) have commented negatively on it.

And now I will have my own say!

The comments by General Petraus echo the concerns of many Americans, with reference to his assertions that this will be used as propaganda by the Islamists and taken as evidence by everyday Muslims of the MidEast that America really is the Great Satan and that they should redouble their efforts to kill our people overseas. I’d buy that, if not for the fact that they’re already doing their best to kill them. It could imperil them with regards to the more fence-riding people of the region, but most of those we’re going to be truly relying on will realize that this is a consequence of living in a free society,and that it doesn’t reflect the stance of the United States government or the vast majority of its people. I don’t see this as being as problematic as the Abu Ghraib affair, in the long run.

For its impact on relations with Muslims in this country I’m far less concerned. Any Muslim here realizes that they are no more intrinsically immune from protest or antagonism than any other group in this country. Trashing a Koran in no way violates anyones rights, even if it does offend their sensibilities. If I set up a howl every time my sensibilities were offended, I’d constantly whine…much like CAIR itself does, incidentally. As far as I’m concerned, they can take a long walk off a short pier. That organization deserves way more scrutiny than a singular unaffiliated church in Florida, in my opinion.

What bothers me is the fact that these people are within their rights to do this, yet more people are worried about this than they are about more egregious abuses of free speech. Consider the Westboro Nonbaptist Church stomping on Old Glory as they mock the families of dead soldiers at funerals (aside: that these fools haven’t been shot and killed yet is both a mystery and a miracle…if it were my child being laid to rest after defending the freedom they exercise to condemn his sacrifice, I’d be in jail for multiple homicide). Consider also the proposed Cordoba House mosque, an Islamic shrine to be erected within sight of the crater where the World Trade Center once stood. This seems to be yet another case with all the talking heads being concerned with how concerned they should be in another case of very legal yet quite uncouth expression of faith.

Of course, one might wonder about the biblical considerations of such a maneuver. First of all, despite having grown up in a nondenominational church, I’m not a fan of the breed. Granted, the one I grew up in was Bible-based and its beliefs mirrored that of most conservative fundamental assemblies. But I don’t trust a church that has no indication as to its belief system in its name, i.e., “Baptist”, “Methodist”, “Lutheran”, et. al. At least, that way, you have some inkling of what to expect. Based on my reading of their “About Us” page, it sounds like a stereotypical small-town five-fold charismatic group of kooks whose belief system sways with that of its leaders. There’s no mission statement there, but what is there sounds like a flowery press release than a statement of belief.

Therefore, it is no surprise that they would do such a stunt as this in order to draw attention to themselves.

I guess that boils down to the question of whether Islam actually IS a religion of the Devil, and should anyone say one way or the other? As a Christian, I believe I can give an answer. Given that Jude 3 enjoins Christians to “contend for the faith” (re: to go to bat for what they believe), it makes sense for Christians to have a stance on a number of issues and be prepared to defend them in light of their beliefs. This is logical: if it means anything worthwhile, it’s worthwhile to defend. And Islam and Christianity can’t both be right, no matter what some feel-good guru would have you believe.

I would go so far as to say that all religions of the world are in fact, “of the Devil”. Biblically speaking, this is a non-negotiable fact: God proclaims Himself as the one, true God…

3 But if anyone loves God, he is known by God.
4 Therefore…we know that “an idol has no real existence,” and that “there is no God but one.”
5 For although there may be so-called gods in heaven or on earth—as indeed there are many “gods” and many “lords”—
6 yet for us there is one God, the Father, from whom are all things and for whom we exist, and one Lord, Jesus Christ, through whom are all things and through whom we exist.
7 However, not all possess this knowledge.”
(1 Corinthians 8:3-6, ESV)

Being that Christianity is more of a relationship than a religion (in that in its most biblical form it has very little ritualism), I would even argue that much of the religious fluff it’s picked up over the past 1500 years falls in the heading of paganism and, therefore, devilish origins.

However, do we take this as license to behave boorishly towards those of unlike faith, or no faith at all? Never! The Bible affirms the singularity of God the Father by identifying Him with Jesus as God the Son. This differentiates the God of the Bible from the Allah of the Koran, as it claims that Allah had no son. But a Christian must realize that this understanding is to be used to lead others toward the same understanding, and that is not accomplished by treating others poorly and without empathy. Romans 12:9-21 tells us how to live out our faith (quoted from ESV):

9 Let love be genuine. Abhor what is evil; hold fast to what is good.
10 Love one another with brotherly affection. Outdo one another in showing honor.
11 Do not be slothful in zeal, be fervent in spirit, serve the Lord.
12 Rejoice in hope, be patient in tribulation, be constant in prayer.
13 Contribute to the needs of the saints and seek to show hospitality.

14 Bless those who persecute you; bless and do not curse them.
15 Rejoice with those who rejoice, weep with those who weep.
16 Live in harmony with one another. Do not be haughty, but associate with the lowly. Never be wise in your own sight.
17 Repay no one evil for evil, but give thought to do what is honorable in the sight of all.
18 If possible, so far as it depends on you, live peaceably with all.
19 Beloved, never avenge yourselves, but leave it to the wrath of God, for it is written, “Vengeance is mine, I will repay, says the Lord.”
20 To the contrary, “if your enemy is hungry, feed him; if he is thirsty, give him something to drink; for by so doing you will heap burning coals on his head.”
21 Do not be overcome by evil, but overcome evil with good.

If you need it in a nutshell, Jesus (as usual) said it best: “…as you wish that others would do to you, do so to them.” (Luke 6:31 ESV) I fail to see how they can be an effective “outreach center” if they disobey Paul’s admonition to “walk in wisdom toward outsiders… Let your speech always be gracious, seasoned with salt, so that you may know how you ought to answer each person.” (Colossians 4:5-6, ESV)

So, what do we do? The single best thing to do would be to shut up about it and let the people do what they want to do at their own church where they aren’t hurting anyone. If you want to prevent the repercussions that are feared, the news media could just not film or cover the event. Given how much love they’ve shown for the troops in the past (Wikileaks releasing war files, New York Times destabilizing intelligence efforts, and CNN correspondents receiving leaked info of safehouses in Kabul), don’t hold your breath.

In the end, however, burning books–any books–leaves a really bad taste in my mouth. It makes me remember the words of Henry Jones, Sr.: 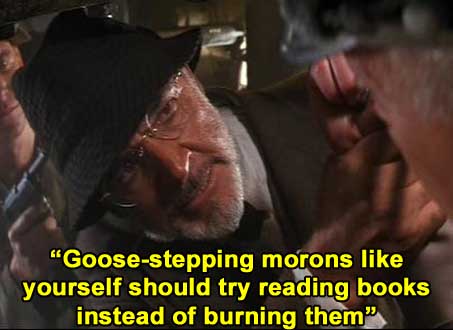