I’m a ringtone guy. I change them fairly regularly, if and when I find some I like. However, I’m not a believer in buying anything when there’s no need, and prices tend to be exorbitant for what you get. Plus there are portability issues.

Because I’m a cheap rascal, I make my own from a variety of sources…sampling cool song solos, video game snippets, fun bits of dialogue, TV theme music, and the like. So, not only am I cheap, but I’m able to be pretty flexible in what I get to use.

Some people have asked me about how this is done. The bad news is that some phones are funky about what they allow as far as tones on their phones (this reminds me of the old thing from Mel Brooks’ Robin Hood: “a toll is a toll, and a roll is a roll, and if we don’t get no tolls then we don’t eat no rolls!” But anyway.) My short answer is this: “I don’t know.” Your mileage may vary. Check your phone manual.

My means of putting them on mine is either to transfer directly from the computer by cable (using Motorola Phone Tools, as I use Motorola phones) or put them on my SD memory card and put it in the phone. The latter is preferable, as mPt is pretty kludgey, but, again, check that out in the manual.

Another reason to check it out is to determine what limits you’re dealing with in terms of file sizes, sample rates, and tone lengths. File size is the biggie, as mine in particular won’t take anything over 300KB in file size. So anything over that simply won’t work. This seems to be a major hurdle, but there are means of keeping the sizes manageable and still sounding good. These means include the sample rate and tone length, which I’ll get into next with file editing.

First of all, you will need to download two files. Audacity, according to its site, is a “free, open source software for recording and editing sounds.” This is the big one you’ll need, as it’s the program used to actually capture/import, modify, and save the ringtone files.

I’ll tell you how to do it, but you need one more file…the LAME mp3 Encoder. This is a free file that will let you save your edited sound files in mp3 format. Download the zip file and put the file called “lame_enc.dll” in a folder you can find later, as Audacity will ask for it when you get ready to save. Once all that’s done, you can start editing files.

Once you’ve installed Audacity and put lame_enc.dll safely away, start up Audacity…it’s time to get started in earnest. The first thing that must be decided is where the file’s coming from. Let’s say you’re opening a music file to edit into a ringtone…hit Ctrl-O (same effect as “File” -> “Open…”) and find your file, which can be an mp3, a wav, or most any other file format. You’ll see a waveform that looks like this: 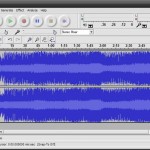 To transform this into a reasonable ringtone, we want to take a distinctive portion of it that works well as a tone. What that means is, we want a part that’s recognizable (“hey, that’s a Tom Petty song!”) and can be clearly heard over a cell phone speaker. I find the best sounds are relatively high-pitched (if not shrill…I have a couple of those if you want to check out the uncomfortable side of things) without a lot of bass…guitar solos, brass, cymbals, and bright tones from old videogames tend to come through the best. In our example, I’ll go the simple route and just use one part of the song: the very start of it.

Audacity will let you select the part of music you want to edit by left-clicking and dragging over the part you want, and since we want to get rid of everything but the beginning, everything needs to be selected. The cut-off point may be tough to see, so you can zoom in (Ctrl-1, or “View” -> “Zoom In”) to find where the vocals start and cut off from there. Don’t worry that you can’t see the rest of the song to highlight; just zoom back out (Ctrl-3, or “View” -> “Zoom Out”), and then you can left-click at the end of the blued-out selected area and drag it the rest of the way. Then hit the Delete key (Ctrl-K, or “Edit” -> “Delete”), and you will see this: 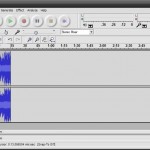 Zoom in to see what you’re working with: 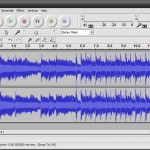 You may have a blank space at the very beginning…that can be deleted just like the previous section was. Now, you can do some more editing at this point, which will allow you to polish your tone. For instance, it’s a pretty drastic cut-off at the end, there…let’s file it down using the Fade Out command. Select the part you want to fade by highlighting it, and then go to “Effects” -> “Fade Out”: 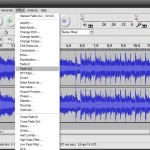 You might possibly want to throw some more edits in there. For instance, maybe you have a segment that has a nice guitar piece that you’d like to loop. This will use the old Copy and Paste command. Select the part you want, and then hit Ctrl-C (“Edit” -> “Copy”) to make a copy of the snippet. Now, you can Paste it (Ctrl-V, or “Edit” -> “Paste”) at any point you choose in that file, the more flexible way of doing it is to put it in its own little window pane. Do this by clicking outside the waveform and making the paste, which will look like this: 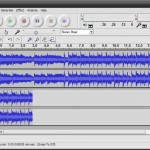 Now, if you play it as-is, you will hear the pasted sound play over the original one…that’s no good. Time to learn another function of Audacity: in the upper-left corner under the File menu option, there’s a group of six icons: 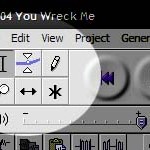 Click the one with two arrows going left and right…the bottom middle icon, the Time Shift Tool. Now when you drag the mouse, you can move the waveform at the bottom to the end of the other one, so that they overlap. Play with this until the two mesh pretty well. And you can even paste in more loops if you want. 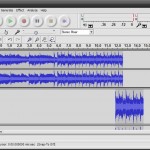 There are lots of effects you can use, and you can put in as many additional tracks as you like, but don’t get too ambitious to begin with. Play with different functions and tracks and sources over time, and you’ll learn quickly, maybe even learning to enjoy it (as I did). But at some point it’s time to finish things up and get ready to put the tone together.

The first thing to do is to combine everything into a single file. If you’re using multiple tracks, this is done by mixing them together…select the tracks by holding the Shift button as you left-click the side boxes (where the track information is on the left), and then lower the gain of all tracks to -3 or -6 (in the side boxes, the -+ slider bar). Next, go to “Project” -> “Quick Mix”: 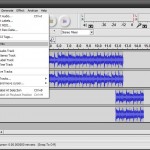 The following waveform results from the mixing: 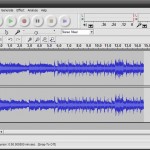 You might notice that the waveform is a lot smaller than it was…this was from pulling down the gain. Why’d I do this? If not pulled down, the mixed waveform would be too loud. We can get it back by selecting the whole waveform and Amplifying it (“Effect” -> “Amplify”). The dialogue box that shows will give options, but it defaults to the maximum amount of volume gain you can get without making it too loud. Just hit OK: 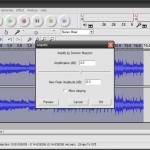 We don’t need stereo ringtones…so let’s get it monaural. While some phones can do stereo sounds, it’s better to go mono because A) they’re more portable if compatible with mono phones, B) sound tends to be clearer, and C) file sizes are reduced. Click at the top of the side box (should say “Mix” with a drop-down arrow next to it), and on the drop-down menu select “Split Stereo Track”:

You will now have two waveforms named “Left” and “Right”…these need to be made monaural, so go to each waveform’s drop-down menu and select “Mono”, then go back and do the Quick Mix command again. You’ll probably want to do the Amplify command again, as well. Basically, you can edit this resulting waveform just like earlier if you want, but it’s better to do it before you do all your processing.

You can change the recording rate to reduce file sizes, but this can be tricky. For instance, if you go from 44.1kHz to 22.05kHz (done in the side box drop-down menu), you will also have to double its speed (done in the Effects menu) to compensate for the slowing of the sound. I don’t see a real improvement, but I bring it up because some sounds are 48kHz, and some phones hate this rate (mine does). Converting from 48kHz to 44.1kHz requires some math to figure the appropriate speed adjustment, but I figured that adjusting the speed up by 8.85% will do it (math nerds, regardez vous: 48kHz-44.1kHz/44.1kHz). This should only be a problem if you recorded your own sound, rather than pulling from an mp3 or other music file.

Speaking of recording your own file, I don’t recommend doing voices over a microphone. It never sounds good, unless you have access to a studio-quality microphone (as I do at the radio station where I work part-time). More useful are internet or video game noises and sounds, but they can’t be recorded unless you have a discrete sound card (as opposed to on-board sound, which is the majority of cases now). For instance, my desktop doesn’t have one, but my laptop does. I like finding sounds online and recording them through Audacity…just fire up Audacity, make sure the recorder is set to stereo or mono mixer: 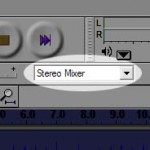 Hit record while the sound plays over your computer. Just be sure to hit stop after it’s done…if you have low memory or little hard drive space, you’ll have problems! You can edit it just like I showed before.

To save your file as an mp3, you’ll have to remember where you put your lame_enc.dll file. Click Ctrl-P (“Edit” -> “Preferences”) to get to the preferences screen, and go to the “File Formats” tab at the top: 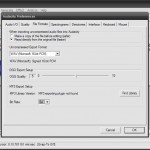 Click the “Find Library” button to find the DLL file. Once this is done, at the Bit Rate drop-down selection menu, choose “64”, as 64kbps tends to be the best all-purpose bit rate for ringtones. I’ve noticed some sounds do well at 32kbps, which is good as it halves file size, but unless it’s some old Bugs Bunny cartoon or old video game beeps, I’ve not had a lot of luck with it.

There are many things you can do in Audacity…I didn’t even get into the Envelope Tool or the cooler Effects options, but you can play with those. There are tutorials on the web that show how to manipulate Audacity, but you should be able to figure out most of it based on this article and, hopefully, your own aptitude.