For some perverted reason, over the last few years there’s not been a Christmas that has gone unspoiled by some tomfoolery. This year, the flashpoint is apparently centered in the Washington State Capital building, where an atheistic organization placed a sign protesting religion in general, Christianity in particular, and Christmas expressly. The Freedom from Religion group petitioned to post the sign, and the state apparently didn’t find it worth opposing. Of course, instead of posting an alternative symbol aiming to include and represent non-Christian citizens, it instead was a hostile rant seeking to vilify the origins of Christmas, marginalize Christianity, and declare all people of faith to be deluded or delusional.

The group in question has proven itself to be naught but a vindictive group of killjoys for the rest of the nation who are willfully ignorant of certain historical facts that are not in dispute. Not only this, but the state of Washington, the governor in particular, has proven itself to be an unprincipled band of kowtowers to the foolish kook fringe who tend to gravitate to the Seattle area.

First of all, the holiday is Christmas…not the winter solstice, not Kwanzaa, and not Hanukkah. The holiday takes place on December 25th, not the 21st, not the last seven days of the year, and not a week determined by a lunar calendar. Christmas is a lot of things to a lot of people, but it remains at the core a day set aside for the celebration of the birth of Lord Jesus Christ, which remains, by anyone’s measure, a major turning point in human history. Was it a co-opt of previous holidays? Maybe it was…the Bible doesn’t call for the veneration of the incarnation of the Savior of the world. But what matters is that this nation sets aside this day for that reason. Furthermore, whether that’s the actual day He was born is immaterial; the Martin Luther King birthday commemoration isn’t necessarily observed on the day of his birth…just the closest Monday to it. The complaint of the sign is historically baseless.

Next is the fact that this sign is set up in protest of the symbols already on display in the setting in question. I say, “okay, then place an alternative alongside, put on your happy pants, and move on with your life.” Oh, but no! There was no alternative symbol offered…they posted a position statement. And a patently offensive one, at that. I know a guy on a message board who has as a signature file a statement by epic idiot Bill Maher, “don’t be so tolerant that you tolerate intolerance.” This is exactly what this band of miscreants has done, but I don’t see the PC police mobilizing to defend the offended here. But I’m not looking, either, since I’m not so foolish that I’d expect it. It’s open season on mocking the faithful, and it’s pathetic that a state government has given such a hateful attack its endorsement.

It’s a display that smacks of spiteful children railing about how unfair some fact of life is. I mentioned message boards earlier, so consider this example of such childishness that should certainly be familiar to those who’ve ever been part of such online communities. A thread is begun on some topic that people feel strongly about…let’s say it concerns football. Board members trade posts about what they think of the season, their teams, make prognostications, argue over who they think is best…and then some colossal nerd comes in saying, “sports are stupid, football is the worst of them, and you’re all idiots for liking it.” This sort of puerile peevishness almost exactly describes what has happened in this case.

In the spirit of fair play, I propose the following sign be placed adjacent to this piece of trash: 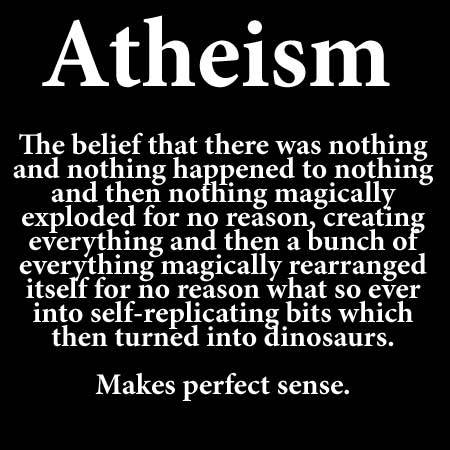 7 thoughts on “Merry…winter solstice? I don’t think so.”