Last time, I had compiled a proposed collection of parts for an ambitious project: creating a home theater personal computer that will use my high definition television and 5.1 audio system as a platform for all my downloaded video formats, computer-based video games and classic console emulation, MP3 collection, and Blu-ray player…all housed inside an early-eighties vintage Atari 5200 Super System console.

I placed orders online, and here is the result. Most parts arrived within a couple days of each other, though there were a couple stragglers, primarily the on/off and reset switches and LEDs. Luckily this was hardly cause for alarm, as these items had to be sent from Ontario to Mississippi.

The first thing that had to happen was to strip the case of its internals, and the first step was to remove the screws that held the top and bottom halves of the case together. There are seven in total:  (the two inner-most screws from the back side).  This project reused the screw posts in their original positions, which means these had to be retained for future use.

The coaxial wire around the bottom, originally used to connect the console to the television, would be removed later in the process. As alluded to in the photo caption, the bottom would later require…modification. Sizing the components after gutting the case will show what had to be done to make everything fit while still comfortably containing it all.

This is the result: a top-half that pulls away from the bottom, leaving behind the lower-half with the motherboard still attached. Like the bottom half, the top half would require a fair amount of modification to suit this project. In fact, it required more to be cut out, but that was the extent of it.

Of note, however, is the fact that the case pictured above was not actually used in this project. It had a broken back door and (as you can tell in that photo) front fascia…two factors that excluded it from use. After cursing the existence of the eBay seller of that unit, I bought a second from another gentleman, which was used in the final build. It turned out to be in much better shape.

But get a load of this motherboard!

This board comes equipped with an RF shield. Apparently it was an FCC dictate in the video game stone age regarding electronics that connected to televisions had a threshold of radio frequency interference it was allowed to contribute to the airwaves, and the higher frequency microprocessor in the Atari 5200 had to be controlled by an ad hoc Faraday cage to contain the radiation.

While very interesting, it’s basically being thrown away. Not really, as I’m an incessant hoarder of such things…hey, I might be able to use it in repairing my Atari that I can still play one day! But probably not: it’ll get thrown out the next time I get disgusted with how the house looks on account of my collectivist idiosyncrasies.

After gutting the case, it was time to get a good idea of where what would go. There were some obvious choices to make here. First, I wanted to retain the screw posts, so that forced the drives between them up front. I knew the blu-ray drive (yellow cut-out) would have to be up-front, so the hard drive (orange cut-out) would naturally go to the opposite side. Since the solid-state drive (pink cut-out) was so small and thin, I could be flexible with its placement. Because of cabling issues, it’s final position was beneath the hard drive.

There was no question as to the location of the motherboard (white cut-out) from the start…it would have to go in back for input/output purposes as well as maximum height utilization, due to the wedge-shape of the case. The back was a perfect fit: 6.7″x6.7″! However, the bottom posed an issue due to the recess that once accommodated the RF out cable. This would be remedied in short order. 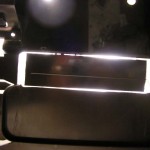 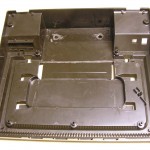 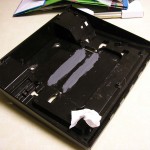 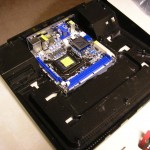 As you can see in the first picture, the bottom recess was completely cut out, and the scrap plastic was replaced after removing the “angles” left behind. Then I taped the shank onto the case and stuck it there using QuikSteel, an epoxy putty renowned for its strength. Bonding this piece of plastic to the case left a flat surface upon which the motherboard could be mounted as shown.

An unforeseen issue: the back surface was angled upward, which made mounting the input/output shield tough. I got around this through the clever use of stand-offs. I had bought a couple different heights–5- and 10mm– to get the board off the case while giving leeway for height. The solution was to put 5mm stand-offs on the back of the board and 10mm stand-offs on the front to make the mobo match the angle of the back plate!

It was at this point that the back plate had a hole cut out for the I/O shield to sit, and then the top had to be modified as shown. What you can’t see is, not only did the back of the top-half need cutting out, but the cartridge port had to be whittled down to size. This was critical, as it had to be high enough to oblige the motherboard, CPU, heat sink, and fan! Luckily, the use of those 10mm stand-offs was not a detriment here, and it would all fit well together.

From here, things get progressively more nit-picky. First is the power input. This was one of the simpler things I did on this project, as it involved the use of a pin vise to manually drill a hole through the back of the box and the end of two files to ream that hole large enough to screw in the power jack. 4-pin power connector inside the case was a component of the pico-PSU circuit assembly, and the exterior plug interfaces with the 150W power rectifier that provides the direct current juice that subsequently gets regulated inside by the power circuit. 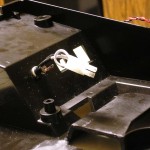 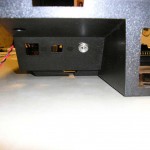 The next item up for discussion is the power switch. The original 5200 button was retained in this build, with plans to attach the power, sleep, and drive access LEDs to the case, which conveniently had three holes for LEDs when it only used one originally. As if I needed more indication that I chose well with this case! But using the button would require the construction of a bracket that would hold the power switch.

Behold: the first application of styrene plastic to the project! After aligning the button with the bottom of the case, I realized it intersected with some pre-existing extensions that formerly held the RF cable in place. Starting there, I took a rod of 1/4″ styrene plastic (normally used in model making and toy modification), cut it in three pieces, and joined them with cyano acetate (Super) glue. Then I took a 1/4″ sleeve of styrene plastic, stuck the power switch into it, and glued this small assembly to the other plastic pieces. Then the bracket was glued to the extensions mentioned earlier. While it wasn’t a perfect alignment, it was close, only requiring the addition of styrene to the bottom of the button to close the distance and provide tolerance for the connection in space.

From here, the rest of the build involved the construction of the drive brackets, motherboard build-up, and final connections and setup. A follow-up article will be forthcoming very soon…the pictures are already uploaded and ready to be narrated! I also have a short video from the start of the case modification process that I may edit together and post as a companion to this article.