Having been a frequent peruser of the CZ Scorpion EVO III Enthusiasts page on Facebook, I’ve noticed a number of questions that crop up pretty regularly. Here’s an attempt to answer most of those questions. What follows is an attempt to provide accurate and current information along with personal opinions based on my own experience. I hereby present to you… 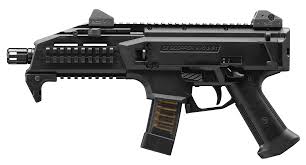 So, what is this thing?
Here’s the manufacturer’s official site, but it’s basically the same as the CZ Scorpion Evo 3 A1 submachine gun without the folding stock and only available in semi-automatic to remain legal for importation in the United States as a pistol carbine. Chambered in 9x19mm Parabellum, the action is a simple direct blow-back design with a stationary 7.72″ barrel and non-reciprocating charging handle surrounded by a glass-reinforced polymer shell with an overall length of 16″.

…what else?
It’s a light-recoiling, high-capacity 9mm carbine that’s easy to clean, fairly lightweight at 5 pounds, and has low cost of ownership compared with other weapons of its type (MSRP of $849, as opposed to the Sig MPX at $1378 MSRP, and magazines for less than $20 MSRP, again, as opposed to the MPX mags which are $55 each).

What is it really good for?
Asking what a gun is for is totally subjective, but many use them for home defense, range plinking, car/truck gun, and, thanks to the plentiful mounting rails, heavy-weight back scratchers. Basically, if you have to ask, it’s not for you.

What optics work best with it?

Low-mounted red dot sights work particularly well with this firearm, particularly if you want to co-witness with the factory sights (i.e., have them lined up together). As for what to get, a lot of people seem to think that the smaller and lighter it is, the better. Just remember: you get what you pay for.

Examples include Bushnell TRS-25, Burris FastFireII Reflex, Vortex SparcII, AimPoint Micro H-1, and there are many more. There’s a veritable plethora of options out there, but those listed are some of the more popular ones that are readily available…I have a Primary Arms Advanced Micro Dot on mine. And this doesn’t even touch all the MOA dot-size options.

Granted, I’ve come to believe that achieving co-witness is over-rated since the Scorpion’s factory sights don’t flip out of the way. It may be preferable to go with a higher-mounted sight with a hollow riser that allows use of the irons. For that matter, a lot of people are just going with the excellent factory sights or adding AR-style flip-up back-up type sights. Simply put, the sky’s the limit. Do your research and try to figure out what you want.

What weapon lights work with it?
Basically any of them that mount on picatinny rails will work. I use the Inforce WML, as I like how the shape matches the Scorpion…plus, the forward lens bezel looks a lot like the stock flash hider!

I would, however, have preferred a tighter focus and less flood than it has. In contrast, I have a cheap Nebo pistol light from Walmart whose spot characteristic is much more to my liking, even if I don’t particularly recommend it. I find it important because, in low-light situations, proper sighting is less critical, as bullets should pretty much go to the middle of the spot.

What about stock options?
CZ-USA has a pistol brace kit available that allows the attachment of a buffer tube to the Scorpion using a buffer tube adapter that attaches to the rear of the pistol. They also carry a side-folding adapter if you’re so inclined. From here, the user may attach such things as a buffer tube with pad, a Sig SB15 arm brace, a Shockwave Technologies stabilizing blade, or a Thordsen Custom cheek rest. Hera Arms makes a Side Folding Unit (SFU) that allows flush side-folding on a static buffer tube adapter. Also, Manticore Arms announced on their Facebook page in May 2015 a new Compact Slider stock they are working on.

HOWEVER: these are not to be used as a shoulder stock per the Bureau of Alcohol, Tobacco, Firearms, and Explosives (BATFE). They are for arm bracing and forming cheek weld only. Of course, you could shoulder it and probably never get caught, but to do so would consist of “redesigning” the firearm into what is considered under the National Firearms Act a short-barreled rifle, and without an approved form 5320.1 and tax stamp on hand you’d be liable for 10 years in federal prison and $10,000 in fines.

Where do I find magazines?
The first place to check is the CZ-USA store. They are nowhere near as difficult to find as they were during the first few months of the gun’s availability, but it’s a good idea is to check various suppliers and use the stock notification function many of these stores have available.

As an aside, there have been reports that some magazines have developed cracked feed lips, particularly 20 round versions. This has been attributed to factory polymer formula problems and incorrect feed springs, but whatever the case it should be reported to CZ if and when the problem crops up so they can replace it.

Will I get in trouble using a brace?
See above.

What about short-barreled rifle conversion?
Any weapon being converted into a short-barreled rifle must first be approved by BATFE per the National Firearms Act of 1934. As mentioned above, a form 5320.1 (usually referred to just as a Form 1) must be filed with BATFE and approved before such a device may be assembled. There are many issues that must be addressed in doing so, and there is already a good article explaining the ins-and-outs of the process that can be found at The Truth About Guns: NFA For Beginners: Form 1 to Manufacture an NFA Item.

If you are granting your NFA firearms to a trust, you may e-file your documentation. For information on how to do this, there is an exceptional walk-though located here: How to E-File an ATF Form 1, by Steve Jenkins.

What’s this about 922(r) compliance?
Per the Gun Control Act of 1968, 18 U.S.C. § 922(r), you can’t put together a semi-automatic rifle or shotgun that would have been banned from importation due to it containing a variety of components that are prohibited from importation. This is why the gun was imported in pistol configuration: so that it’d fall under the law.

CZ-USA is selling a factory stock along with a 922(r) compliance kit as a workaround for this issue. The first sets have shipped and sold out as of this writing (November 2015), with a second wave to come in the new year. Once back in stock these may be ordered through the CZ shop web site or any number of other retailers.

For more information on 922(r) compliance I refer you to yet another article on The Truth About Guns: Guns for Beginners: 922(r) Compliance and You.

Are there variants of the Scorpion out there?

Although some arrived with the original designer logo on the receiver (Laugo), the only real differences involve some early models that came with sling rings on the left side sling point. That seems to have been limited to the earliest imports of the Scorpion.

However, the factory folding stocks come in first and second generation models. Clayton Harvey on the CZ Scorpion Enthusiasts FB forum was kind enough to post a comparison. Gen 1 is all polymer and locks in folded position, while the Gen 2 has an aluminum mount and uses a magnet to stay folded. The Gen 2 also has a rubber butt-pad, which may prevent flush folding.

What manufacturers are supporting it?
As the popularity of the Scorpion platform builds, it’s just a matter of time before more companies begin to support it with new products. Here is a list of known parts and accessories:

Comments? Corrections? Questions? Donations? Use the comment section below. Thanks for reading..